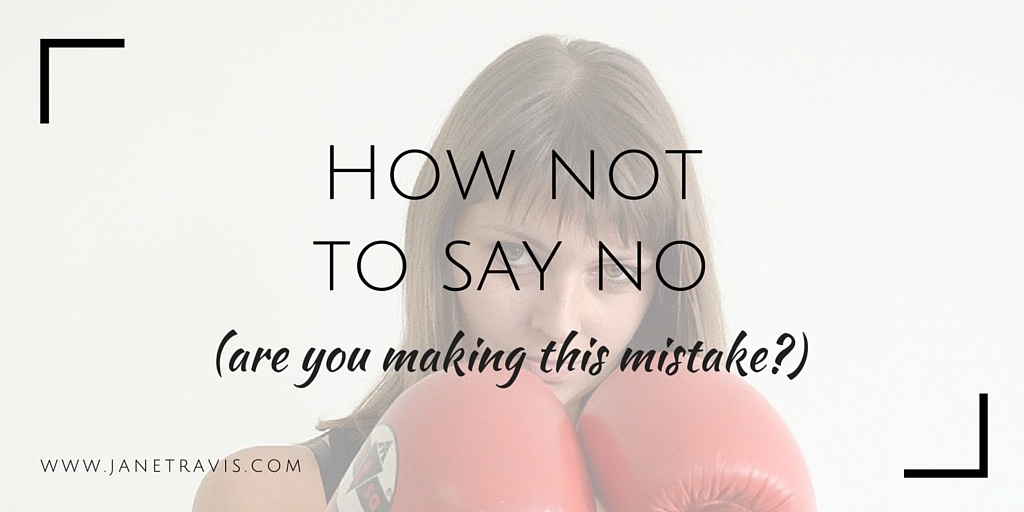 How Not To Say No

There's an art to saying no.  A right way, and a wrong way.

When you get it right, it makes life so much easier: less stress, more free time, no conflict, no anxiety.

I used to have a friend - let's call her Kate.

Kate was fed up of having her good nature taken advantage of, so she enrolled on an assertiveness course.

She learned all about her right to say no, how to deal with aggressive and passive aggressive people, and it made a massive difference to her.

Her confidence rose​ and she got a new lease of life.

​But she hadn't quite got the hang of it

​I had a girls night in planned, with a theme.

The theme was red - everyone had to wear red, all the food was red and I made copious amounts of woo woo's (a red cocktail if you don't know - delish!)

'​Hi Kate!  I'm having a red themed party on Saturday, would love if you could join us!  Let me know - jane x'

​A while later I got a text back from her.

That's all it said.

It felt a little as though she had slapped me around the face. ​Well I'm here to tell you that no is NOT a complete sentence! No is NOT a complete sentence!

I was hurt, I was confused and I thought she was very rude.

If she couldn't make it or it wasn't her thing that's fine, but her response actually made me feel stupid for inviting her - humiliated even.

It made me realise that she hadn't quite grasped the idea of assertiveness!​

Assertiveness is about creating win/win situations.

Situations where both parties come away feeling okay.

In this case, a simple 'Hey, thanks for the invite.  I can't make it, but have a fabulous time' would have been fine.

She didn't have to explain herself, lie or make up an excuse/reason, but she ​DID have to consider my feelings and she DID have to be polite.

When you say no, you don't have to explain yourself or lie, but you DO have to be polite!

​Saying no can feel tricky, but it's an easy skill to learn.  If you find yourself saying yes when you want to say no, my course 'T﻿ake Control: ﻿Say No' makes it easier than you ever thought possible!

Once you've learnt it you can politely excuse yourself from doing things you really don't want to, and take back control - it's basic self care!

7 blogs that teach how to say no

Finding time for yourself

But there is a right way to say no, and a wrong way.

The right way to say no is with respect​.