Intuition: A Fascinating Skill You Should Trust (And 5 Reasons You Doubt It) - Jane Travis - Self Care for Busy Women 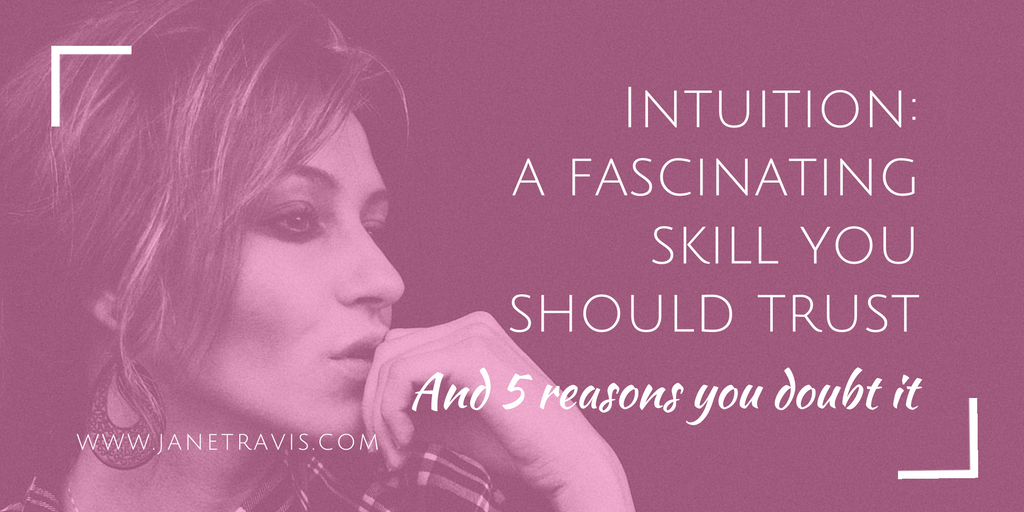 Do you trust your intuition, your gut instinct, that little voice that tells you there's something wrong?

Picture this: Match.com has finally paid off, and in among all the unsuitables you found him.

He's still on Match.com.  He hasn't removed his profile because he says he's made some good friends on there and doesn't want to lose touch.

And that doesn't ring true, because friends can email, or text, or ring each other. But you don't say anything, preferring to give him the benefit of the doubt, only to discover some time later that he was a lying douchebag and still actively dating others.  <sigh>

'Aah yes', I hear you cry, 'so many times I had that little voice nagging away and ignored it...but it was right!'.

why do you doubt yourself?

Because acting on a hunch is crazy - isn't it?!

​You've heard that you should trust your intuition, but do you know what it actually is?

It sounds like something magical, mysterious, a 6th sense - and it kind of IS a 6th sense!  But it's easily explained and simple to understand.

I watched a documentary some time ago about this phenomenon, which told the story of an experienced fireman ​tackling a nasty fire.  He sensed something was wrong, despite the fire seeming under control.

His sense of foreboding was so intense he pulled his men out of the room - moments before the floor gave away.

He'd picked up on subtle clues that he wasn't consciously aware of - air temperature, air movement, sounds/lack of sounds.  He acted on his intuition, and prevented a disaster.

Babies love to look at faces more than anything else, they're programmed that way. Their eyes can only see things 8-15 inches away, which is just the distance between the baby and mother when feeding.

All that staring makes them experts at reading facial expressions, detecting moods and emotions.

So despite babies and infants having no speech or real understanding of language for years, they learn a huge amount about communication through body language and facial expressions.

It's a skill you retain but outside your conscious awareness. In 1967 Albert Mehrabian and Susan R Ferris condicted a study into the importance of non verbal communication.

They concluded that in communication:

​These findings have since been questioned, but nonetheless it's safe to say that huge amounts of communication is non verbal.  So we are experts on it.

​When you have an uneasy feeling, something you can't quite put your finger on, this is you subconsciously picking up on subtle facial cues and body language, recognizing that something doesn't add up.  And it's subconscious - out of your conscious awareness so you don't know why you feel uneasy.

This is your intuition.

​why choose to trust a potential douchebag OVER YOURSELF?

We've all had that eureka 'I KNEW something was wrong!' moment, so why don't you trust your intuition?

​Intuition is, by it's very nature, not evidence based.

Humans are logical creatures, and our justice system is based on the collection of evidence supporting claims.  Innocent until proven guilty.  Therefore, making accusations which can't be backed up doesn't sit well with us.

You have an uneasy feeling about someone, but they are a master manipulator, and manipulative people are experts at making you doubt yourself.

For example, your friend belittles you in public.  You're upset, but when you speak up you're told 'I was only joking, your problem is you're too sensitive'. ​

​You feel sure they were being nasty, but this makes you doubt yourself - maybe I am too sensitive?.  This is classic passive  aggressive behaviour.

A​ manipulator will make you doubt yourself, confuse you and reassure you everything is okay. They are very charming, and also hard to both spot and stand up to.

So the guy is still on Match.com​, and that makes you feel uneasy.  You feel unsure, so you reason it out, be reasonable.  After all, he IS allowed friends, of course, and who are you to dictate what he should and shouldn't do.

​Also, you don't want to appear possessive, worried it might scare him off.

You see your doubts as YOUR problem, a negative trait you have, blaming yourself for your lack of faith and telling yourself you are a bad person for not trusting people.

This stems from being around manipulative people when you were growing up, and never learning to trust your own judgement - remember the bitchy friend from earlier?  Being told you are 'too sensitive' criticizes your reaction and makes it feel like a problem, when in fact your reaction is perfectly normal in the face of aggression.

You also worry that voicing your fears will result in you being rejected​, so you keep quiet.

And here's the biggie.  Fear.  Fear that you are right, and that you have to face something unpleasant.

This fear drives you to make like an ostrich and put your head firmly in the sand, ignoring warning signs and denying that anything is wrong, hoping that if you ignore it for long enough it'll go away.  It won't, sadly

​Should you act on a hunch, like a maverick TV detective?

'Thanks, Jane, that's REALLY helpful' I hear you cry!

This is something to really reflect on, so if you don't use a journal, now's the time to start - and if you don't know where to start, take a look at 'How To Start A Journal'

Your intuition tells you something is different, and you can investigate that further through communication. So when faced with a partner assuring you 'there's nothing in it, we're just friends', or a friend says 'you can tell me, I won't tell anyone', or a date says 'you can trust me', and your little voice screams - take note, take a step back and take care.

Do you trust your intuition? Has it saved you from something? Please, comment below.

follow me on:
Previous Post 11 Surprisingly Simple Steps To Master Small Talk – Even If You’re Painfully Shy! Next Post How To Spot A Liar (with 7 resources to help protect yourself)