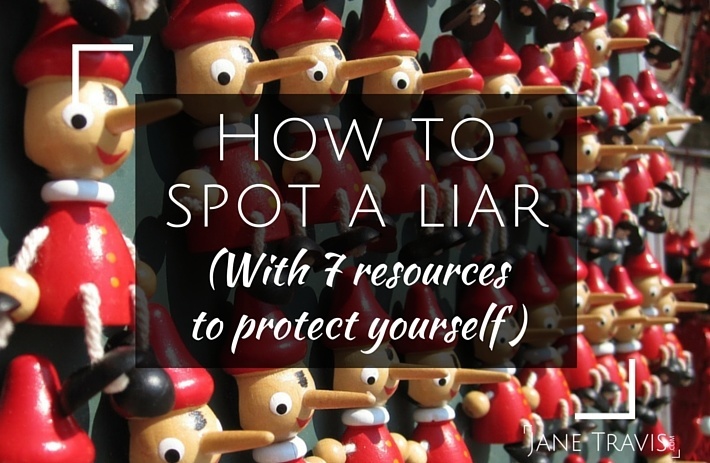 ​Did you watch House, the TV series about the grouchy, sarcastic, Vicodin gorging genius doctor?  ﻿If you didn't, I'd highly recommend it.

I loved it. I loved each of the 177 episodes. And I loved Dr Gregory (Hugh Laurie) House MD (or DGHLHMD for short).

He comes out with some amazing one liners, but the one he's most known for is:

‘It's a basic truth of the human condition that everybody lies’

(Or ‘everybody lies’ for short).

Colleagues tried to disprove his theory (I guess we want to see the good in people) but grouchy, acerbic House was always right.

From a very early age kids lie.  Even animals lie.

It’s not all bad though, it's said to be a sign of intelligence, and if we remove the judgement, take away the concept of good and bad we can see that lying can help you to be successful, manipulate things in your favour so you get what you want.

So given that we all lie, that means that we are all regularly lied to - according to Pamela Meyer (see below) anything from 10 to 200 times a day.

Now if that means the answer to ‘does my bum look big in this’ is 'no', I can live with it. At times like that I prefer a white lie to ‘brutal honesty’ any day. (Like shopping with my friend and poking my tummy distastefully, asking 'do I look pregnant in this dress?' and being told 'of course not, you’re too old to be pregnant'.  Thanks.)

But not all lies are so benign. Some whoppers really hurt. The lies cheating partners tell, for example.  And some are dangerous - deliberate attempts to do you harm or swindle you. How do you protect yourself from those?

Here are some of the best posts about spotting lies.

This is a TED talk, and is brilliant, obviously.  It's about 18 mins long, so grab a drink and relax.

Pamela says: '​When you combine the science of recognizing deception with the art of looking, listening, you exempt yourself from collaborating in a lie. You start up that path of being just a little bit more explicit, because you signal to everyone around you, you say,

Hey, my world, our world, it's going to be an honest one.My world is going to be one where truth is strengthened and falsehood is recognized and marginalized."And when you do that, the ground around you starts to shift just a little bit.'

2.  Secrets from the FBI: How to spot and really nail a liar - Maseena Ziegler for Forbes

This article explores how there's no 'one size fits all' method to uncover a liar.

“There is not one single behavior indicative of deception – there is no Pinocchio effect. There are behaviors that are indicative of psychological discomfort, anxiety, or distress but those can be because of the setting (testifying before congress) or because of the interviewer (dislike for authority) or perhaps the questions are intrusive. It can also be because the person is lying or has guilty knowledge. In any case the best we can do is look for behaviors that shout something is bothering this person when I ask a question. The minute I sense discomfort I wonder why.”

3.  The best and worst ways to spot a liar -David Robson for BBC Future

The aim is a casual conversation rather than an intense interrogation. Under this gentle pressure, however, the liar will give themselves away by contradicting their own story, or by becoming obviously evasive or erratic in their responses.'

Justin interviews LaRae Quy, a who spent 23 years as a counterintelligence agent for the FBI, and now spends her time writing, speaking and teaching others tips that she learned while working for the Bureau.

'Truthful people tend to add details and remember more facts as they repeat their story. Liars, on the other hand, memorize their stories and try to keep them the same. (If they add details, they often don't add up.) If you suspect someone is being deceptive, ask the person to recall events backward rather than forward in time.

For example, start at the end of a story and ask them to explain what happened right before that point. And then, before that… and so on.

For truthful people, this makes recall easier. Liars often simplify the story to avoid contradicting themselves'

5.  How to spot a lie - Robert Biswas-Diener for Psychology Today

In this article, Robert explores wh​y we lie, looking at studies which show children can spot fake emotions from a very young age.

​'It turned out that 16-month-old children could not detect emotional artifice while 19-month-olds could. The latter group was able to pick up on whether feelings were appropriate to the context, appropriate in their intensity, and whether they were displayed appropriately.

Somewhere in that second year, we learn to spot fake'

And then 2 by yours truly:

7.  Intuition: a fascinating skill you should trust, and 5 reasons you doubt it​ - Jane Travis

I bet this has happened to you: that feeling that something just wasn't right, only to discover later that your hunch was right.  why is that, and why don't we listen to that little voice?

Take my mums simple advice for spotting a liar - even when their pants aren't on fire! ​So there you have it, DGHLHMD was right, we do all lie.  And spotting a lie isn't easy.

All of us will get caught out from time to time despite our best efforts, so it's important to remember that it isn't your fault and you aren't stupid for believing someone, it happens to the best of us.  Some people are very skilled liars and manipulators.

However, if you know you had a little voice saying 'don't trust this person' and you chose to ignore it, you should reflect on that and work out why.