The choice is yours - Jane Travis - Self Care for Busy Women 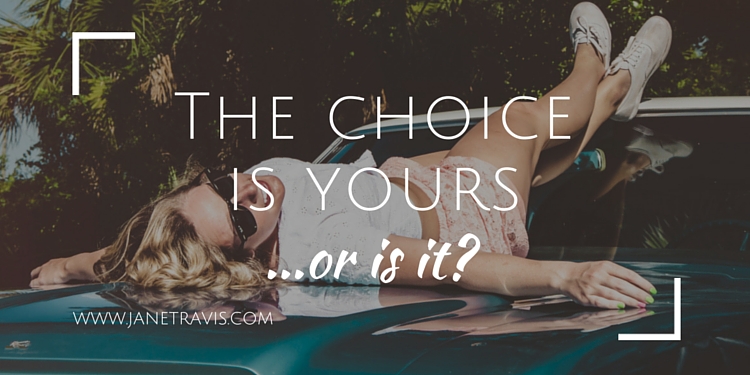 The choice is yours

Is it your choice?

You're an adult, a grown up, a mature, sophisticated woman of the world.  You are in charge of your own life, your own destiny and you make your own choices.

These are true stories...

​Imagine this: My friend was buying a house

She saw a house, viewed it​ and fell in love with it.  It felt right, had 'the vibe' and she knew it was the house for her.

Unfortunately, others didn't see it that way.

It was almost opposite a large supermarket, and in front of her house was a busy roundabout. Her friends and family saw this as a big black mark on the house, making it undesirable.

Every time she listened to others, her heart sank and she doubted herself.  She loved the house, but having it's faults listed made her feel unsure.

She didn't buy it.  She bought a more 'sensible' house, and she never liked it.  Every time she drove past 'her' house, she​ regretted not sticking with her intuition, not standing up for herself.

Imagine this: My friend was seeing a guy.

Then, after a lovely night out he proposed.  She felt like a rabbit in the headlights, froze, panicked ​and said yes.  After all, she didn't want to hurt his feelings because he was a 'good guy'.

When she woke the next morning, her heart sank and she knew she needed to talk with him.

However he had already excitedly ​told family and friends the good news, and they were all delighted.  After all, he was a 'good guy'.

She didn't say anything.​

When she tried talking to friends about how she felt, they put it down to pre wedding nerves.

And she was swept along in the excitement, feeling trapped.  Swept along right down the aisle.

Imagine this: My friend was dating

She had started chatting to a guy via a dating site, then exchanged phone numbers and were texting and calling.

The evening before they met for the first time, the call got a little saucy, which was exciting and fun​.  However she felt a embarrassed when they met face to face because she had shared a part of herself she hadn't been ready to.

They had a great time, chatting, laughing and getting to know each other.  She liked him, and was attracted to him - YAY!

But at the end of the evening he wanted more than just a kiss goodnight, and because the previous night she had enjoyed the saucy talk, she felt that she had to, even though she didn't really want to.  She didn't want to hurt his feelings, or be called a tease.

They spend the night together.  She didn't see him again.  She was devastated. ​

Imagine this: I was buying a car.

Choosing and buying whatever car I wanted.

A time of mucho excitement, I'm sure you'll understand.

Of course, my budget was woefully limited so not a totally free range of choice, but smaller, older cars would fit the bill nicely.  ​

My dad knew about cars (as dads do!) so I asked him to help, to let me know if he spotted something in my price range worth looking at.

And herein lies the problem​

My dad only looked out for one make and model of car - a Ford Fiesta.  He'd show me details of Fiesta's for sale in the local newspaper, and in local garages.  He explained what good, reliable cars they were, cheap to run and insure​. How it would be a great little car for me, a perfect runaround.

Apart from the fact I didn't want a Ford Fiesta!​

​This was a conundrum, because it meant saying no to my dad. 'No, dad, I don't want that'.

And this brought me immense anxiety.

Because when I'm with my dad I morph into that little girl seeking my dads approval.  If I say no I worry - will he be angry with me?  Disappointed?  ​Think I'm silly because I know so little about cars?  Think I'm ungrateful for not heeding his advice?  Will there be conflict?  Bad feeling?  Disapproval?

I literally lost ​sleep over this, totally tied myself up in knots.  It took me weeks to pluck up the courage to tell him I didn't want a Ford Fiesta.  Literally, weeks.

But I did it, and hey, guess what?  The world didn't stop turning, he didn't disown me.  I think he was a little miffed, but it was okay.  ​

I'd worried myself to distraction for weeks, all for nothing.

So despite it being my money, and me that would be driving the car, the need to please my dad, to conform and to be a 'good girl'  was so overwhelming that I almost bought a car I didn’t want just so I didn’t have to say no.

So when I say I understand how difficult it is to say no, I mean it.

The inability to say no can have serious consequences.

However, the ability to say no is a skill that can be learned.

Things changed for me:

When I trained as a counsellor, part of the training is your own self reflection and awareness.

Things continued to change through my experiences with clients.

They changed even more when I learnt about assertiveness

And then even more when writing and delivering assertiveness workshops.

Now, I say no with no problem at all, but it took me a long time to learn.

You can learn by trial and error. Or you can fast track the whole process​ and take advantage of what I learned.

I put together 'How to say no without feeling guilty or changing your mind'  using all the training, skills and experience I have gained to change your mindset and make saying no easier than you ever thought possible.