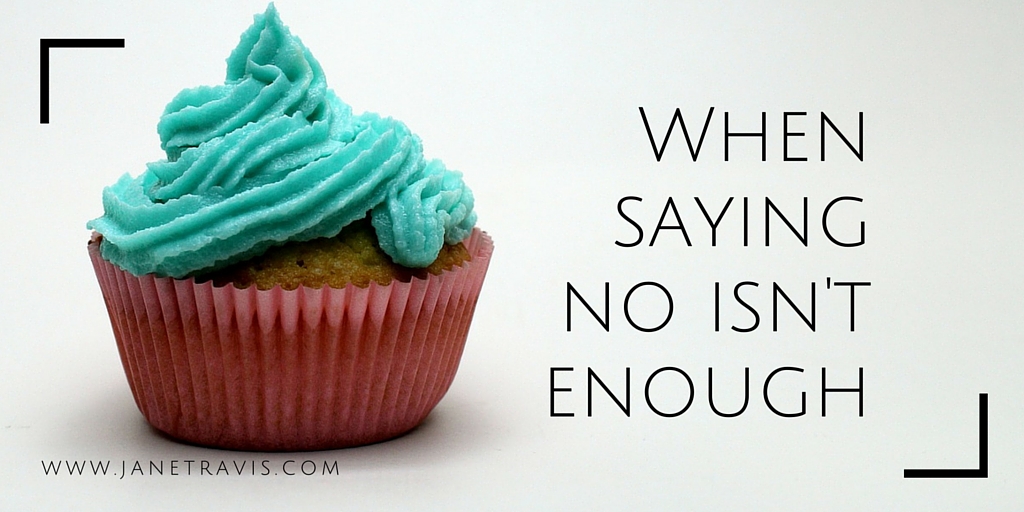 when did saying no politely stop being enough?

Okay, there may be worse ways to go.  But if you've ever been visiting someone and having coffee, and they offer you cake, you'll know how difficult saying no to people can be.  ​

I was brought up to be polite, and I bet you were too.  Saying please and thank you, excuse me and may I.  Be respectful, don't offend, don't be cheeky.

So when I am offered cake at a friends house and I don't want it, I very politely decline:

But then this happened!

'No really you must, it's very good' she says

Hang on, we're going off piste ​now - my mum didn't equip me for this.  This no longer is manners for dummies, it's advanced manners.

Thinking on my feet I say ​‘It looks delicious, but no, thank you’. Phew, I think I dodged that curveball.

Now, it feels awkward. Now, it’s starting to feel like a conflict.

Now, it feels less like being offered a treat and more like a game of chicken - who will be the one to back down?

​I don't want the bloody cake.  I don't like bloody cake!  And I prefer to save my 'having a treat' calories for something I'll enjoy, like wine and/or Maltesers

​'It does look lovely, but no, thank you'

Eventually she got the idea, but I got the feeling she thought I was bring rude.

who was the one being rude in this scenario?

​This is why it's hard to say no

It's not the initial 'no, thank you' that's hard - actually, that's pretty easy.  It's the attempts at changing your mind by any means possible, whether that's to bully you, to be passive aggressive, to be rude, to be disrespectful or to be forceful. THAT'S when the guilt kicks in, THAT'S when you feel bad and doubt yourself, THAT'S when you need to stand firm and realise you have done nothing wrong.

Did I do anything to be guilty about?  No, I just didn't want cake, so declined politely.

That should have been enough​

When this happens - when people try to change your mind, it's not about your wants and needs, it's about theirs.  They wanted the praise and thanks from you, they wanted to feel good and that's all they had in mind.  It's about their own agenda.

But that's not what we're thinking on the drive home, are we?

This is the stuff that ties us up in knots.

Isn't it just easier to eat the damned cake?

It's tempting isn't it.  But consider this:​

It's not always something as trivial as cake that we are being persuaded to do.  If you can't say no and stick to your guns with cake, how will you deal with more serious issues?

Think of this as a safe way to practice saying no and not changing your mind. ​

And practice with the trivial situations, so you have the confidence to refuse a more serious request. ​

If this sounds like you, I have something that'll help, because this is all covered in 'T﻿ake Control: Say No'.

So if you want to refuse cake, do it - and don't beat yourself up about it!