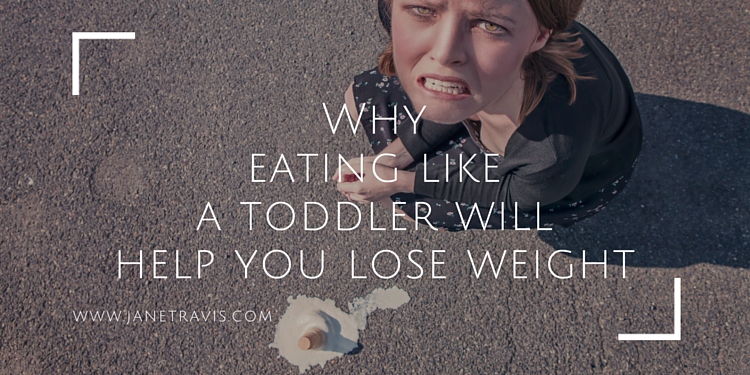 Why Eating Like A Toddler Will Help You Lose Weight

No, I don't mean smear spaghetti on your face and wear a pelican bib!

If you observe a child - let's call her Flossie - you will know that she only eats when her tummy tells her to.

If you try offering her something when she's not hungry, not only is she not interested, she is not very pleased that you disturbed her game (and rightly so, these bricks won't build themselves...)

Flossie also stops when she has had enough.

It doesn't matter that you spent an hour cooking, or are in an expensive restaurant, she simply doesn't care.

Flossie is very happy with this arrangement.

Flossies mum, on the other hand, is less happy...

She worries that her daughter won't get enough nourishment and will miss out on vital nutrients.

The thing is, Flossie will never starve herself because when her body needs nourishment it tells her. Her tummy rumbles and she gets hunger signals​, and she will most certainly let you know.

It's exactly the same for us.  Listen to your body and it will tell you exactly what it needs.

Like after Christmas, when we have eaten rich food non stop for days, if not weeks, and by January our bodies cry out for something light, fresh and wholesome.

So what happens when Flossies mum lets her fear or inexperience get the better of her?​

Well, she might try to feed her by the clock.

Or to encourage her to eat, Flossie might be rewarded - by mums approval, a reward chart or chocolate.

Naturally, Flossie wants each of these things, so she overrides her physical hunger and eats.

Over time she gets out of touch with her appetite.

She eats when she isn't hungry, and she eats more than she ​needs in order to be rewarded.

This can set Flossie up for a lifetime of ​difficulties around food and eating.

After all, if you aren't hungry before you eat then how will you know when to stop?​

If you aren't hungry when you start eating, how will you know when to stop?

Intuitive eating encourages us to eat like a toddler again.  It helps us recognize hunger and satisfaction, which naturally curbs overeating.

Well you no longer have to.  Now, YOU can decide when you are hungry, and how much you need to feel satisfied.

Our bodies, left to their own devices, will regulate their intake quite naturally.

We just have to learn to trust ourselves​

Do you stop when you are full?