Scared of being rejected? Try this! - Jane Travis - Self Care for Busy Women 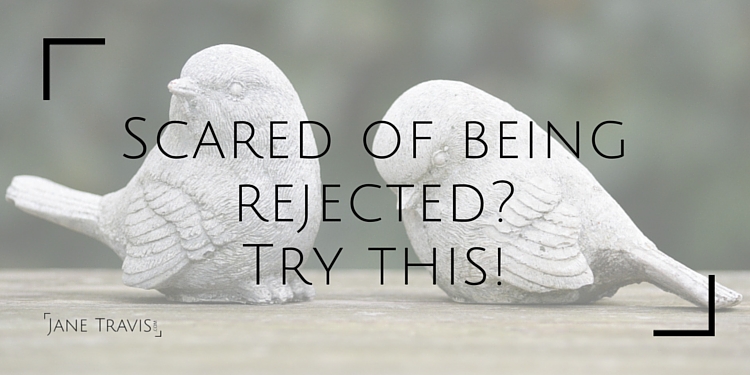 Are you scared of being rejected?

Being rejected is a bummer.  I mean, it's a slap on the face, a kick in the teeth and leaves you feeling lost, abandoned and deserted.

Picture this: It's summer term at school, so that means netball in PE.  The girls are picking who they want on their team. I stand, waiting for my name to be called and I feel the butterflies in my tummy and the sting of unshed tears as I wait for my name to be called, and as usual mine is one of the last names picked. I can still remember the feelings of rejection, embarrassment and humiliation even now.

The pain caused by rejection as a child can be crippling - memories of being bullied, a parent leaving or a loved one dying (which kids can interpret as rejection) are so devastating you'll do anything - anything - to avoid it happening again.  ​

But how often do we actually experience rejection, though?  I mean, really?

Thankfully, we don't actually experience rejection often, but that doesn't lessen the fear.

It's this fear that turns you into a people pleaser, bending over backwards to make others happy in an attempt to not be rejected.

And you struggle to say no - you don't want the other person to feel rejected, because you know how that feels, and you wouldn't want to make anyone else feel that. ​

No.  It just makes you vulnerable, because fear of rejection means you'll agree to do things you don't want to do.  This makes it easy for the takers and manipulators in the world to get you to do the things they want.

The people that like you do so purely because they think you are amazing and brilliant, great company and have lots of shared interests and ideas.  They want you around because they value you for you, not for what you can do for them.

How can I be so sure?

Because I'm a qualified, experienced and registered psychotherapist, and I have worked with people pleasers for over 11 years.  I know and understand your fears, not only as a professional but also as a recovering people pleaser myself, so you know this comes from a place of experience, not just theory.

You can overcome your fear of rejection​.

Let's think back to my netball experience from earlier.  It wasn't me that was being rejected - not on a personal level.  What they were rejecting was my inability to play netball, my lack of skills, and once I realized this, it changed everything.

The fear of rejection is no longer helping you to avoid being rejected, it's now putting you in a position of vulnerability by making you afraid to say no, so you can let it go, replace it with something that's more useful - the ability to decide what you want to do and say no to unwanted requests.

So instead of hearing yourself agreeing to sit through a 3 1/2 hour opera when you hate opera, you can say no without fear of either conflict, rejection or worrying that you've upset the other person, and use that time to do something you want to do. Can you imagine how would that feel?

'How to say no, without feeling guilty or changing your mind' is a course delivered directly into your inbox in 10 manageable chunks.  It explores and eradicates your fears around saying no, making saying no easier than you ever believed possible.  You're left with less stress and more time to do the things YOU want to do.

What have you got to lose? Simply click the big orange button below